One of the important lessons we have learned in our short time here is while it is advisable to heed local advise, at the end of the day the journey is ours. We must make the final decision where and when to go. 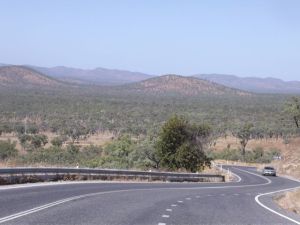 Enroute from Port Douglas to Cooktown

Prior to our deciding to visit Cooktown, much of the advice we received from other Australian adventurers is that “there is nothing there so give it a miss”.  While that could have been the case, we find we are at the end of a brilliant three days here.  Unless you are a 4WD enthusiast, the Mulligan Highway is the only way in and the only way out. From Cooktown it is north to the top of Cape York and definitely 4WD country. We are not attempting that journey at this time of year but may give it a go next April/May when the roads have been graded. Some might say the journey to Cooktown was boring, but we loved the scenery and the long winding roads.

We can best describe Cooktown as a town still in the 70’s and that’s where the locals appear to want it. When we arrived on Saturday there were very few shops open apart from the RSL, Bowls Club and the two hotels and the same on Sunday. There is a 7day flourishing tourism industry here but everything else was very quiet.  It was quite quaint actually – sort of like New Zealand before 24/7 trading.

Over the last three days we have been out and about seeing as much as we can. Much of Cooktown’s (and Cape Yorks) history appears to revolve around Captain James Cook’s discovery of the place in 1770, the Palmer Gold Rush of 1873, the decimated pearl industry and of course the 41 tribal nations that inhabit the Cape. A few shots of our Cooktown visit HERE . 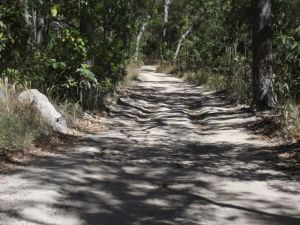 On the track to Trevethan Falls

The little jeep got its first ever ‘4WD’ workout today. We were told last night that an excellent spot in the area was the Trevethan Falls some 18km south of Cooktown and about 12km inland.  It could only be accessed by 4WD. So off we set this morning (after filling up with petrol!!!) on our adventure. It was not too long after leaving the Highway that we discovered why it was 4WD territory. We had great fun in the little jeep albeit we were being thrown around ‘just a wee bit’. A larger 4WD vehicle would have made the journey just a little easier. 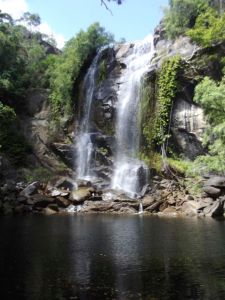 However once we had arrived at the Falls, we could not have wished for a better destination. It was a beautiful place hidden in the middle of nowhere. We were the only visitors there and off course we had to jump in for a swim.  We had been advised before we left Cooktown that there were no crocodiles in the area.

On our way back to Cooktown we stopped for a late lunch at the Lions Den, a little pub out in a farming community about 30km south of town. The pub had been there since 1875 and many say it has not changed too much since then. There are no beers on tap and wine is out of a cask!

We are off out to dinner tonight at the local Bowling Club with a few of the other travellers in the Park. It will not be a late one tho’ as we have quite a long journey tomorrow (we want to head south and at least get to Atherton) so want to be on our way reasonably early. We are hoping to catch up with friends there who we have met previously in Port Douglas.

Our verdict of the Cooktown visit – if you get the opportunity, it is worth the effort to get here.

3 thoughts on “Playing in Cooktown”