It has been a lovely four days in Mt Isa but it is nearly time to move on.  The temperatures here range from 32 to 35 deg C during the day and dropping to a cool 25 deg C !! at night. It makes going for a leisurely stroll during the day quite a challenge. We did not see too many other people out walking. 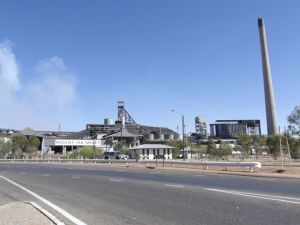 Mt Isa Mine in the city limits

We ‘drove’ up to the town’s lookout yesterday and in viewing the town from above it was easy to understand how the high temperatures are achieved. The Isa looks as though it has been built in a crater i.e. the town is in a lowland area and is surrounded by a ring of hills. It is almost ‘mirage like’ as the lowland is very green from above but the surrounding hills are red.  There is usually a little bit of wind each morning but nothing from about midday through to the next morning. It is quite impressive really. A few more shots of Isa HERE .

There were not a lot of places in Isa that we could take the motorhome. Many of the major attractions are on unsealed and soft roads that are only accessible with a largish 4WD. While we saw what we could, there were lots of other places we wish we could have got out to.  We travelled out to as much as we could in the little jeep but one had to be very careful on the roads. Perhaps another time on another day.

On Saturday night we took ourselves off to the local sports club to watch the All Blacks vs Australia game. There are plenty of Kiwi’s who work in the mines in Isa so it was more like being at the Ponsonby Rugby Club than the Mt Isa Sports Club.  We ended up by having dinner at the Club after the game and were made to feel very welcome by the other Kiwi’s there.

We made a visit to the Mt Isa Underground Hospital this afternoon for no other reason than it is a ‘must do’ when in Isa.  History has it that the Japanese bombed  Darwin in February 1942. It was feared that because of the rich lead deposits in the Isa region, that Mt Isa could be the next target. With this in mind, the Mt Isa Hospital Board decided an underground hospital would be needed to handle any casualties.  Mt Isa miners built the underground tunnels for the hospital.  The job was completed quite quickly and had surgical, medical and maternity facilities.  The hospital is exactly the same today as it was in 1942. More photos’ of the hospital HERE .

We have had a change of plan in our journey from Mt Isa. Some of you will know that we had intended to take the Diamantina Developmental Road from Mt Isa to Boulia and then the Kennedy Developmental Road from Boulia to Winton. We knew the route was single lane and that it was tar sealed. We had also been told that the unsealed road on either side of the tar seal was hard. Unfortunately (or fortunately whichever way you look at it) we were advised yesterday that the unsealed road on either side of the seal is now soft and we may have a ‘spot of bother’ with the weight of our motorhome should we have to move off the seal onto the soft sides of the road for another vehicle to pass.

Some of the decisions we have had to make on our journey have been made easy for us. Road conditions, weather, timing, parking availability, “do we feel like driving” and ‘must see’ spots all play a role in our day to day decision making.  So based on the new information and on leaving Mt Isa, we will now retrace our steps on Flinders Highway back to Cloncurry, hook a right just west of Cloncurry onto the Matilda Highway to Winton, then onto Longreach on the Landsborough Matilda Highway. Where we will overnight on the way is anyone’s guess or whereto after Longreach is still unknown. We will keep you updated.

3 thoughts on “Time In Mt Isa”