We defied the odds on Thursday and made the journey from Moree to Narrabri without having to stay over anywhere. Although we made a few stops between the two towns to look at sights, nothing attracted us to an overnight stop. When we arrived a Narrabri the intention was to stay at the local showground for the night but we found the grounds were closed in preparation for the 2013 Australian Motorhome Association Rally.

After consulting our Camp 7 book and our Australian WickiCamps App, we discovered that approximately 50 km west of Narrabri an area called Yarrie Lake was said to offer excellent camping facilities. So off we headed in to the ‘opposite direction to what was originally planned’ but it was getting late in the day and we needed to find somewhere to park up.

“What a stunner of a place.”  Yarrie Lake is a 3km saucer shaped lake on the edge of the Pilliga Scrub and it is thought to have been formed by a falling meteor thousands of years ago. The local custodians of the lake have created a park like environment where there are a number of grass camping areas all around the lake and approximately 100 metres between one camp area and the next. All campsites are on the waters edge.

We loved the place so much our one night stopover ended up a three-night stopover. Again because we are self-contained we were able to park in an area amongst the trees that gave us privacy, shade but enough sun to charge our batteries and only about 5 metres from the lakes edge. For those who needed fresh water there was plenty around and there were a limited number of powered sites if needed.

If there was any downside to the lake there was no telephone reception so we apologise to family for not being able to respond to telephone calls and emails. To our Australian followers – if you are in the region, Yarrie Lake comes with our recommendation and is certainly worth a visit. 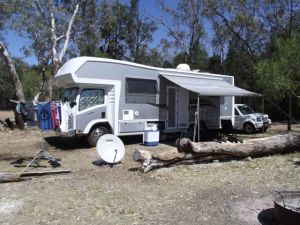 Amongst the gum trees at Yarrie Lake

We departed the Lake this morning (reluctantly), and on the recommendation of a young aboriginal lass, we are heading further west toward Pilliga and the Pilliga Artesian Bore Baths. The baths were constructed in 1902 as a permanent town water supply after a severe draught and the bore itself has become a popular recreational spot for swimming.  The bore water is rich in minerals and is a constant 37 degrees.  According to local folk law, the water has medicinal properties and is a good healer for aches and pains.

It is our intention to over night at the bore and then drive east again tomorrow into Narrabri and then onwards to Tamworth. Our plan is to be in Tamworth by Wednesday or Thursday.

Just as a snippet of information for you – we are currently driving through the Pilliga forest in northern NSW and toward Wee Waa. Beneath the forest lies one of Australia’s largest onshore natural gas reserves. It is estimated that gas from this area alone could be sufficient to supply current levels of NSW gas demand for the next 50 years. The natural resources of the ‘lucky land’!