New Years Eve in Canberra was a very low-key affair for us. Not sure why, but the thought of spending New Years Eve at some ‘social event’ in the city with the well lubed public spilling happy juice all over us just does not turn us on any more. A quiet evening on the couch at brother Chucks abode in Canberra watching the fireworks in Sydney on television accompanied by a few wines and rum and cokes was far more enticing. Happy New Year everyone – we hope your New Year was as relaxing as ours. Did we make any New Year resolutions? Yep – to stay happy, healthy and solvent. Does anything else matter really?

New Years Day (Wednesday) it was back in the motorhome and dealing with the adventures of 2014. We drove northeast with the goal of spending a night to the small country township of Cowra.  Our overnight spot was the Cowra Reserve, a free camp area just out of town and beside the Lachlan River.

Dearne at the Japanese Garden in Cowra

What makes the history of the event even more remarkable are the actions and efforts of the people of Cowra in the years following the breakout. These include the fight to have the bravery of two of the Australian soldiers killed during the breakout recognised and the caring actions of the Cowra Sub Branch RSL who informally maintained the graves of the Japanese soldiers as a mark of respect for an enemy who were fighting for their country. The energy of the township now focuses on the spirit of reconciliation for future generations. A truly inspirational town.

During our Cowra visit we spent a respectful few hours at the site of the POW camp, the Cowra War Cemetery, the Japanese War Cemetery and the Cowra Japanese Garden – 5 hectares of stunning horticulture.

A few more photographs of our Cowra visit HERE .

On Thursday morning we departed Cowra and continued our drive inland making our next stopover the Carcoar Dam.  The dam is situated 6 kilometres north of the NSW township of Carcoar on the Belubula River and in the Lachlan Valley. It is another free camp area of approximately 7 hectares of grassland on the edge of the dam waters. The site is pet friendly, provides drinking water, toilets and ‘cold’ showers. It is a stunning spot and a credit to the local Council who manage the site. We ended up staying for two days.

As an aside, we are loving the free camping opportunities in Australia and are partly here because of that generosity.  We estimate that 70 percent of our overnight stops are free stops, 20 percent are low cost stays i.e. $10 to $20 per night per vehicle and 10 percent are formal campgrounds. We have to be thinking that Australian Councils and Shires seem to be far more in tune than their New Zealand counterparts about the growing  ‘grey nomad’ industry in their country. There were approximately 50 motorhomes and/or caravans at the dam while we were there. Most have to go into the local town during their stay to get supplies/water/diesel/petrol. Work that out on a daily basis and what do you think happens to the income generation in the local town? Not rocket science really.

We agree that freedom camping can come with its issues however believe these issues are manageable with the help of sound and  ‘enforced’ codes of practice (or legislation as a last resort).  We see the same ‘knockers’ of freedom camping existing in Australia as they do in New Zealand. They are usually publicly elected officials (local and central) and who probably wear a green tie and hate seeing people happy. Their goal is to rid the world of all people and animals who fart (with exception of themselves of course) and be left alone so they can continue growing their ‘veges’ and making dandelion wine. Knocker number two is the person who invests heavily in a holiday park then wants to ‘force’ all RV’ers and caravans visiting their town into their investment so they can meet the mortgage or grow their bank account. They totally overlook the fact that we do not like being crammed in tiny spaces with a 1 or 2 metre gap between each van or pay $35 to $40 for a piece of grass to park on for the night.  As you can see we are passionate about this issue and will do our utmost to defend the opportunity to be able to freedom camp. Here endeth the political broadcast.

We departed the dam this morning and decided to visit the township of Blayney. We needed a water top up as we were not quite sure where our next overnight stop was going to be. Another thing we love about our journey in Australia is that most Councils provide a fresh water tap at their main building for travellers such as ourselves. The tap in normally within easy reach of our fresh water hose and you can always guarantee the water is good.

After topping up with water and purchasing of few groceries, we headed back down to Carcoar , hooked a right at Mandurama and followed a country road through Walli, Canowindra, Eugowra and into Forbes. Gee it’s dry through the backcountry. How the farming communities survive here amazes us. We may think we have got it tough in New Zealand from time to time but really, ‘we don’t know how lucky we are mate’. We think there’s a song there somewhere!! 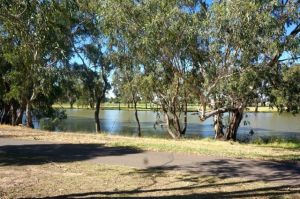 Our free campsite beside the Forbes River

We found a lovely ‘free’ park up area in Forbes called Wheogo Park. The Park is directly beside Forbes Lake and approximately a 300 metre walk to the centre of town. Weather permitting we plan to stay here until at least Monday. In saying that, we are about 10 metres from the waters edge and note the lake seems quite high so we will be keeping a wary eye on water levels overnight.

Like any sailing programme, everything is subject to change.

One thought on “Canberra to Forbes”