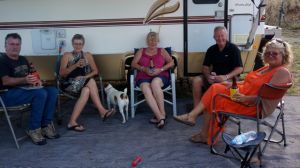 Our Parkes visit has been memorable in a number of ways. Of most importance were the number of wonderful people we met and the number of new friends we can look forward to catching up with as we travel Australia. Parkes was also our first experience of some fairly rugged weather on Wednesday night and Thursday – high winds, thunderstorms and heavy rain. The inclement weather lasted thirty-six hours so making sure everything was put away outside and tightly shut inside was the key to no damage.

While Parkes is renown for its annual Elvis birthday celebrations, it is also home to the iconic CSIRO Parkes Radio Telescope made famous by the hit movie, ‘The Dish’.  While the telescope celebrated its 50th anniversary in 2011, it is still in the forefront of scientific technology.

The theme of the 2014 Parkes Elvis Festival was Elvis’s 14th film, ‘Kissin Cousins’, released in 1964. The festivals VIP was Cynthia Pepper who played opposite Elvis in the film as ‘Private First Class Midge Riley’ – Elvis’s ‘love interest’. Cynthia appeared at many of the festival’s functions talking about her friendship with the King.

Because we were staying at the Showground, and the trotting park is within the grounds itself, we were in the right place to attend the town’s local trot meet on Wednesday night. It was a great party atmosphere with plenty of Elvis impersonators in attendance but the night clearly demonstrated again how little either of us knows about the harness racing industry. Not one victory all night!

One of the highlights of the Festival is the annual pilgrimage that hundreds of Sydneysiders make each year to Parkes by special train from Sydney Central. The train is decorated for the occasion and food and champagne is served to the five carriages of Elvis fans. We wandered down to the station on Thursday at 4pm to watch the train come in – there was some messy passengers rolling off that train.

The US Army girls in the festival parade

The Festival’s parade took place on Saturday morning in stunning weather. The Temperature was around 30C and not a cloud in the sky. We had a fairly ‘heavy’ night on Thursday night so we made sure we did not get quite so excited on Friday night which made getting up in time to attend the Saturday’s parade far more relaxing. We still haven’t got the hang of ‘pacing oneself’ in times of excitement!! You would think it would come with age but apparently not.

Sunday morning, along with about 1000 other festival goers, we attended an ‘Elvis Gospel Celebration’ in the underground ‘Wooly’s Carpark’. It was a very entertaining hour or so with the mixture of gospel singing, movie cuts from Elvis’s life story and of course a fairly upbeat church service.

Overall we have had a brilliant week in Parkes. The festival was very much like Whangamata’s Beachhop with lots of venues and bands, continuous day and evening entertainment, good markets, great weather and new friends.

More shots of the parade and our Parkes adventure HERE .

Tomorrow morning we depart Parkes and start our journey south toward Lakes Entrance. It will probably take us a few days to get there as we are bound to find lovely places to stop off for a night or two.  But as we always say – no firm plans.