From Flinders to the top of the Yorke Peninsula 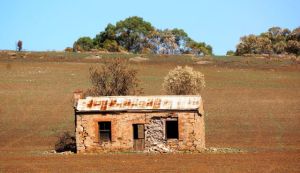 On departing Peterborough on Thursday morning we continued northwest across the Black Rock Plains and into the Flinders Ranges. Many travellers find the agricultural areas of Australia very boring to travel through. We are just the opposite. To travel through thousands and thousands of hectares of cereal crops as far as the eye can see is a real novelty. We find there is always something different to look at whether that be old stone cottages, massive farm machinery in action, farmers happy to stop and have a talk and the never ending wild life.

Our first stop for the day was Black Rock, a hamlet situated on the Black Rock Plains in the mid north section of South Australia. The hamlet was originally proclaimed ‘Dalton’ in 1881 and was renamed ‘Black Rock’ in 1940.  The hamlet has a significant railway history and was part of the Great Northern Railway. Whilst people still live in Black Rock, the town is nearly empty. A number of buildings still stand, including the Black Rock Hotel. This last traded commercially in the early 1980s.

From Black Rock we continued north into Orroroo. Orroroo was settled in 1864 and became a popular stopping point for the drovers and bullockys who travelled through the area. The town has an interesting history and serves the ‘hottest’ coffee we have ever tasted. We are sure that participation in a barista training programme has never been part of the café owner’s plan.

From Orrorro we continued northwest to the town of Wilmington.  Wilmington is nestled in the Flinders Ranges, surrounded by parklands and the Willochra Plain spreading eastward. The town lies just a few kilometres from Mount Remarkable National Park. Wilmington was first known as ‘Beautiful Valley’ by the pioneers who settled in the region during the mid 1850s. 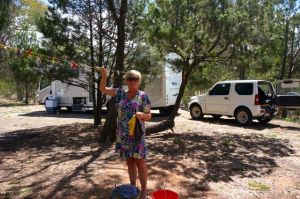 Using our WikiCamps App, the navigator had located a bush camp on a dirt road about 4km out of Wilmington that sounded quite interesting. It was a great decision as the camp was ‘all on its own’ and we had a very peaceful afternoon and night. There is nothing like being in the Australian bush in the cool of the evening with a nice bottle of Pinot Gris.

We started out this morning with the goal of being somewhere around Port Pirie (near the top of the Yorke Peninsula) by the end of the day. We also were going to try and catch up with Dearne’s second cousin who lives at Crystal Brook, about 30km out of Port Pirie.

On the drive we passed through the township of Laura, one of the towns closest to the recent Flinders fires. Being able to see first hand the damage the fires have done to the area, one wonders why you would want to live anywhere near the range. Laura is also home to the famous Golden North Ice Cream factory that first started producing in 1923. 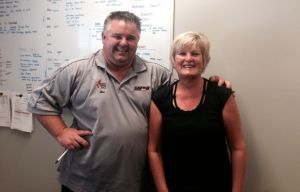 Dearne with her second cousin Alex at Crystal Brook

When we arrived at Crystal Brook we popped into the workplace of Dearne’s second cousin, Alex – we think he was a bit surprised when we showed up ‘unannounced’ but it was great catching up with him again. We last saw Alex about 10 years ago when he stayed with us while attending his grandmother’s funeral in Auckland.

We have now arrived at Port Pirie and are staying at a freecamp about 7km out of the town. Port Pirie is the sixth most populous city in South Australia and is a seaport on the east coast of the Spencer Gulf, 224 km north of Adelaide.

We may stay here a couple of days to stock up on groceries before we head down into the Yorke Peninsula.