Back in the Red Centre 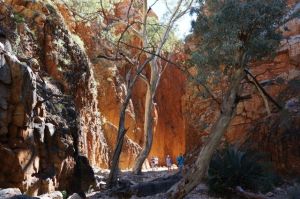 After a very social Saturday night, we departed Alice Springs on Sunday morning in a westward direction to the West MacDonnell Ranges. The plan for the day was to visit a few of the standout attractions in the Range and to spend the night at Glen Helen Gorge.  We had a great day and managed to take in and walk Simpson’s Gap, Standley Chasm, Ormiston Gorge arriving at Glen Helen at around 5pm.

We had selected the best little spot to stop for the night as there was a nice restaurant on site with live entertainment. After a quick tidy up, it was over to the restaurant and another very social evening was enjoyed. 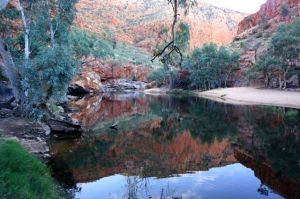 On Monday morning we hit the road quite early as we wanted to visit the local Aboriginal settlement of Hermannsburg some 350km further on. We also had to be back in Alice that night to ensure Janet was able to catch her flight back to New Zealand first thing on Tuesday morning. Hermannsburg is situated on the northern banks of the Finke River and was founded by the Hermannsburg Missionary Society from Germany in 1877. Over the years the village has experienced a number of set backs least of all its ability to survive the severe droughts experienced by the Red Centre.

Hermannsburg today is an Aboriginal community. We spent two or three hours at the historic precinct getting an appreciation of the difficulties the early settlers faced. As an aside, Hermannsburg is the birthplace of Albert Namatjira, the famous Aboriginal landscape artist.

On leaving Hermannsburg we made our way back toward Alice Springs. Just out of Alice we decided to stop at Desert Park, a local wildlife attraction.  The standout for us was an open-air demonstration of the feeding skills of Australia’s eagle and falcon population. We are still not quite sure how the Park was able to bring the birds in at will for the demo.

On Tuesday morning it was an early start to drop Janet off at Alice Springs airport. It was great having her travel with us for a week and to be honest, the van was a bit ‘quiet’ when she left. On leaving the airport we hooked a left and made our way 170km south to Eridunda where we caught up with Harry, Jane, Kathy and Stuart. We all then turned onto the Lasseter Highway and made our way toward Uluru (Ayres Rock).

The Hikers team on top of Kings Canyon

One of the features of our travel is the number of times we change our mind in terms of an ‘end of day’ destination. Tuesday was no different. About 110km along the Lasseter Highway we turned onto the Luritja Road with the intention of paying a quick visit to Kings Canyon. What an absolute stunning place. Australia only broke away from the Antarctica some 45 million years ago however the land formations we were walking over were 400 million years old. While standing on these incredible formations, one measures one’s time on our planet as a mere  ‘spec’ in comparison. Our conclusions while taking in the views – “do not waste the ‘spec’ you have been gifted with. Unlike the rock, we are not blessed with a second chance”. We so enjoyed the area that we ended up staying two days. To top it off, as were we sat down each evening to contemplate our days adventure over a very nice red, wild dingo walked through our camp. They would watch us from the safety of a 2-metre gap and at no time did we feel threatened. Words cannot really describe how much we enjoyed our Kings Canyon visit.

Click HERE for more shots that we hope will do justice to our visit.

Thursday morning it was back on the road to tackle the final 350km to Uluru (Ayres Rock). The roads we have been travelling to get out there have been great. It is all 100kph blacktop and by 2pm in the afternoon we were settled at our camp spot at Uluru. With a few hours of daylight left we decided to go and have a look at Kata Tjuta (the Olgas). They are stunning rock formations about 60km northwest of us. We even got a small walk in while there – the Walpa Gorge Walk. A few shots of our Olgas visit HERE .

This morning (Friday) it was a crack of dawn start with a 30km journey to Uluru to see the sunrise. Unfortunately for us there was a bit of cloud around so it was not as spectacular as it could have been but it was still a wonderful experience all the same. After sunrise we hired a couple of bikes and cycled around the rock – a total of 16km with a wee walk at the end of 2km after returning the bikes to the shed.

We are now back at the motorhome and awaiting our transport back to the Rock so as we can partake in a ‘desert dining out experience’. For $195 each it had better be a cracker!! A few shots of our days excitement HERE . We will let you know how it went on the next blog update. We are heading back into Alice tomorrow (Saturday) as Harry, Jane, Stuart and Kathy are catching their respective flights home on Sunday morning. It has been brilliant travelling with you guys.

Where to after that – we do not have a plan yet but it will be north.