Our campsite at Mary Pool – a stunning spot

As so often has happened in our journey around Australia, we come across many unexpected memorable stopovers. Our journey from the Bungle Bungle has been no different.

We departed the Bungle Bungle on Tuesday morning and travelled 200km to Halls Creek to top up with diesel and have a bit of a look around. To be fair there was not much to stop for and our friend Nick was out of town on business so we decided to carry on through. The plan was then to drive through to Fitzroy Crossing for the night. However about 50km west of Halls Creek we came to a sign that advertised free camping beside Mary Pool in the Mueller Ranges. Always looking for an adventure, we hooked a left and drove about 500m down a dirt road, crossed a concrete floodway and entered a flat area of approximately 6 hectares. There were about 20 other vans already on site so that was us for the night.

We parked up about 50 metres away from the water as we have been finding the mosquitos are very active at sunset around water. The ploy worked and we had no problems at all. It was a great little spot that has quite an indigenous history. We met some wonderful fellow travellers, spent a few hours fossil hunting on the riverbed (while keeping a careful eye on the sunbathing crocs) and each evening enjoyed a very social 5 o’clockers. We ended up staying at Mary Pool for two nights. 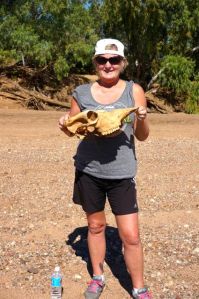 One of the first people we met at Mary Pool was an ol’ sailor travelling on his own and towing a 7 metre trailer yacht behind a vintage Ford Falcon. He spends six months each year travelling this way and sailing as many waterways around Australia as he can find. He uses the yacht as a ‘caravan’ when it is not on the water. His wife passed away two years ago and he decided to carry on their journey. He is in his 79th year and talking with him was truly inspirational. His story was just another incentive not to waste one’s life.

Our fossil hunting was extremely rewarding. We found rocks that were thousands of years old that had lizard and insect parts visible within their form. The good finds are now in the van and we are hoping we can get them back into the country when we return to New Zealand. What will we do with them? Who knows – they are bound to be a good conversation piece. The Navigator found a skull that was most likely that of a young cattle calf. The skull had deep ‘tooth’ indentations around the muzzle and eyes and it would appear that a crocodile had taken the calf as it drank from the river. All the more reason to adhere to the five-metre rule.

On Thursday morning we departed Mary Pool around 10am and made our way 40km west to Larrawa Station Bush camp. The Camp is 4km off the main highway and is a lovely natural setting amongst small trees and spinifex on a working cattle station. We discovered the station is around half a million acres and cattle from there are mainly sent to Queensland for fattening in the feedlots for the Australian market.

For the sum of $20 per night we had clean new showers, flushing toilets, sparkling fresh cold water and fire pits. There was a number of walks on the station with the shortest being a 3km return walk to Christmas Creek. It is the dry season here so much of the creek was just a stone bed with a few pools but it gave us the chance to do a bit more fossicking.

The Station is also the home to a variety of wildlife. The Northern wallaby and the bilby (both endangered species)  are just two who appear magically at sunset. Speaking of sunset, the station has developed seating at the top of a small mound close to the camp where guests can wander up to at the end of the day with their camera’s, wine or whatever and socialise as the sun goes down. A great way to end the day and to meet our fellow travellers.

We enjoyed the station so much we ended up by staying last night and tonight. Many thanks Wendy for providing such a great stopover and of course for the fresh farm eggs.

Tomorrow morning (Saturday 26th) it’s back on the road and to Fitzroy Crossing. We need to pick up a few groceries, fresh fruit, veges and top up with diesel but have yet to plan our accommodation after tonight. As we said the other day we know we have to be in Derby by the 28th pm so there is no time pressure at this point – as long as we limit our exploring, we should eat it in two days.

One thought on “Still travelling west toward Derby”