Our Albany visit has been very relaxing. Having Nicky with us for the weekend and her being able to share a small bit of our journey with us was great. In fact we have enjoyed Albany so much we decided to stay on another day. We will now depart here Tuesday instead of today.

On Saturday morning we made our way to Discovery Bay on Flinders Peninsula and the home of Australia’s last operating whaling station. While we found some of the exhibits challenging, the facility itself was very interesting. Whaling commenced in the area around 1826 and reached its peak around 1845. While there were numerous whaling stations along the south coast, poor seasons affected the viability of most ventures. Due to declining numbers, the killing of humpback whales was banned in 1963 and all other whaling stations closed with the exception of Albany. With the decreasing market for whale oil and the increased pressure from conservation groups, the Albany station ceased operation in 1978. After looking at video. film and exhibits, we are both very glad the whaling business in Australia is no more – it was a gruesome industry to say the least. 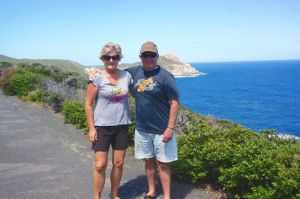 After lunching at the whaling station café, we made our way into the Torndirrup National Park. There are a number of excellent walks in the National Park and we decided to do a walk that followed along the cliff top then wound its way down to the waters edge. There is supposedly a set of blowholes at the base of the cliff but unfortunately for us the sea was not big enough that day to push water through the holes so no blowhole display. It was getting on in the day so after returning to the top of the cliff and trekking back to the car, we made our way back to the motorhome. None of us felt like cooking dinner so after a couple of wines we drove around (with a sober driver) to Oyster Bay and had a ‘fish and chip’ dinner at the Squid Shack, the Bays local seafood café. Not a bad end to the day.

Sunday was a stunner of a day so before Nicky started on her return journey to Perth we visited a couple of the local markets on Albany’s waterfront. While no purchases were made (with the exception of a coffee), we spent a very relaxing couple of hours wandering around. To top the morning off for the Captain, the local hot rod club was having a ‘show day’ on the waterfront. With hot rods and Harley’s on display, he was in heaven. I know what you are thinking but there is no way he is getting back on two wheels – his luck has run its course!! After lunch on Sunday we did a coast walk along Emu Point’s Middleton Beach before returning to the motorhome to start preparing for our departure on Tuesday.

There has been a deterioration in the weather today. As luck would have it, we watched the news last night and the weather forecast predicted rain and thunderstorms for the Albany area today. Based on the information we bought our awning in last night and put our outside furniture away. The forecast was spot on. It has rained most of the morning, although not that heavy, and we have had thunderstorms. We are battened down and are confident we will handle whatever occurs today.

This being our last day in Albany we had a few domestics to catch up on. We drove in to town this morning to stock up on groceries and the last minute necessities. To drive to and from town we have cross about 700 metres of roadway that has been designated as a ‘turtle crossing’. How the turtles know it is their crossing we are not sure but with the road running between the coast and a tidal fed inlet, there is probably a centuries old ‘well worn turtle path’ both ways. For the first time since being here we actually saw a turtle crossing the road this morning. The navigator even had time to leap out of the jeep and get a shot. Much excitement!

The motorhome and jeep are now thoroughly cleaned and we are ready to go tomorrow. Go where you might say? Good question as we are not quite sure ourselves just yet. The plan is to head toward Esperance but we have no date when we will arrive. There is quite a bit to see on the way.

One thought on “Last day in Albany”