Our Last night at Lake Benanee

The navigator made the decision on Saturday night that our destination on Sunday was to be Lake Bananee in New South Wales. It must be said that the borders of NSW, Victoria and South Australia in this area are very close together and flicking between one state and another is only a matter of a few kilometers. One has to be very vigilant with the quarantine regulations and the locations of quarantine outposts. “I did not know” is not an accepted excuse. 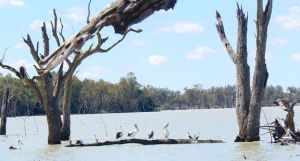 Wildlife on the shore of Lake Benanee

After topping up with diesel in Mildura on Sunday morning we made our way 90km southeast to the little village of Euston. Euston is a small town on the banks of the Murray River, southern New South Wales. The twin town of Robinvale is on the other side of the river in the state of Victoria. Both Euston and Robinvale are home to a large Italian population from the southern province of Calabria in Italy.

In 1876 the settlement at Euston was described as a crossing-place for sheep and cattle. Nowadays it is a gateway to the Murray River and Sunraysia district known for its fruit, vegetables, vineyards, fishing (including the Murray cod) and other native species. After a bit of a wander around the village we made our way 15km further east to Lake Benanee, our home for the next couple of nights.

Lake Benanee is part of the Euston Lakes wetland and floodplain system. When full, the Lake covers an area of around 750 hectares. The Lake has no outflow so water levels decrease through evaporation and increase in times of flood. There is an interesting phenomenon on the lakes edge. There are many very old River Gums with massive dead outer branches but a living centre growing even higher. In times of serious drought, the trees have shut down sap flow to the outer limbs to preserve the core. These trees are the ultimate ‘silent killers’. With 50cm to 70cm dead branches of various lengths just waiting to drop on an unsuspecting visitor, one has to be very careful not to walk or swim under the trees.

The Lake Benanee area has a significant aboriginal history that dates back some 40,000 years. There are a number of burial grounds scattered around the Lake with the dead being buried head to foot in the sand two deep. With both of us being keen walkers, we had to be very aware in our wanderings around the Lake where we stepped. The last thing we want to do is create an international incident!

Tomorrow morning (Tuesday) we will drive back into the village of Euston, cross the Murray River into Robinvale then follow River down to Tooleybuc. It is only about 120km but we are bound to find somewhere interesting to stop for a night or so. The Captain has a wee maintenance job to do on the A-frame when we get to Robinvale. The cable that provides power from the motorhome to the jeep brake lights and indicators has split and is shorting. We are currently leaving it unplugged which is causing confusion for those behind us. If he can get the new piece of cable he reckons it’s only a 30-minute job to rewire. We shall see.