Onto Green Lake then Bendigo

Sunday nights dinner at the Golf Club was exceptional. While we try to live as normally as possible in the motorhome, cooking elaborate meals can be a challenge. The Clubs dinner menu was brilliant and the Captain has probably had his last lambs fry and bacon meal (on potato mash), until we get home!! 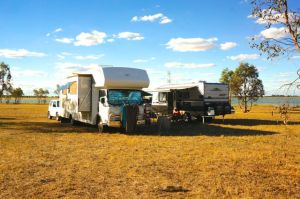 Parked up at Green Lake, Victoria

Monday mornings weather was still on the improve so we decided to move on from the Hilltop Golf and Country Club at Tatura and make our way further west to Green Lake. We had not been able to get any reliable information on the Lake in terms of conditions for camping but there had been no rain for 36 hours so we decided to give it a punt.

Green Lake covers an area of around 170 hectares and is located about 26km east of Elmore or 54km west of Shepparton in Victoria. The road to the Lake is sealed with the exception of the last 2km which was hard dirt and just a wee bit corrugated. Amongst the few trees on the shores of the lake were large expanses of grass areas where we were able to make camp. We had another quick look at the weather forecast and rain was predicted for Tuesday so we parked up on the hardest ground we could find and about 20 metres from the waters edge.

The forecast was not wrong. At about midnight on Monday night the rain started again and did not stop until late Tuesday. We knew that with the state of the ground we would never move the motorhome so we decided to stay put for another night. We woke on Wednesday morning to fine weather but high winds which had dried the ground out a little. With rain being predicted for later in the day, we decided to try and get the motorhome back onto the road. With many around the Lake taking bets we would never make it, it was a slow drive in 1st gear across the grass, up the dirt incline and onto the road. No problem!!! Bendigo here we come. 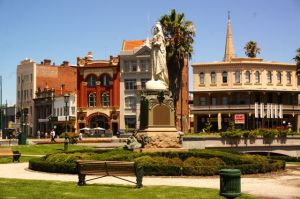 With no free camping close to Bendigo, and because we were going to spend three days in the city, we decided to make our home at the Bendigo Big4 motor camp. The camp is situated just off the main road and about 4km from central city. By the time we arrived at Bendigo it was late in the afternoon and after setting up camp, ‘rum’ o’clock was upon us. A relaxing end to what could have been a very ‘stressful’ day.

Bendigo is a city in Victoria and approximately 150 kilometres north west of the state capital, Melbourne. The discovery of gold in the soils of Bendigo during the 1850s made it one of the most significant Victorian era boomtowns in Australia. News of the finds intensified bringing an influx of migrants to the city from around the world within a year and transforming it from a sheep station to a major settlement. Since 1851 about 25 million ounces of gold have been extracted from Bendigo’s goldmines, making it the highest producing goldfield in Australia in the 19th century and the largest gold mining economy in eastern Australia. Bendigo today is the largest finance centre in Victoria outside of Melbourne and is home to Australia’s only provincially headquartered retail bank, the Bendigo Bank. 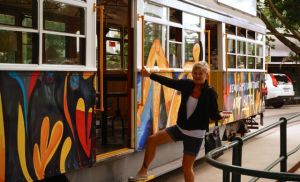 As neither of us has ever been to Bendigo before, on Thursday morning, along with Chuck and Ali, we did the ‘tourist’ thing. What immediately stood out to us was the oriental influence in the city. The gold rush of the 1850s saw many thousands of Chinese arrive in Bendigo. Within ten years, the Chinese miners and merchants made up 20% of the Bendigo population. While most of the Chinese gold miners returned home when the goldfields declined, a small population remained to form the Bendigo Chinese community which continues to influence the city today. In the 1870’s an impressive imperial dragon known as Loong was sent from China. He is now the oldest Chinese dragon in the world and is the highlight of Australia’s oldest event; the Bendigo Easter Festival.

The easiest way to take in all the city’s sights is to jump on one of Bendigo’s trams. The trams operate hourly and sixteen dollars buys you a one day ticket. The line runs from one end of the city to the other and passes by most of the historic places of interest. The great retailer, Sydney Myer, opened his first Meyer store in Bendigo in 1900 – it is still there. The Bendigo Joss House, a Chinese place of worship contructed in the 1860’s and originally part of the Ironbark Chinese camp, can still be found at the end of the tram line. Many historic buildings, all constructed in the mid to late 1800’s, still exist in their original form. The old Post Office and Law Courts, the Shamrock Hotel, the Black Swan Hotel, Peppergreen Farm, the Gasworks and the Alexander Fountain just to name a few. 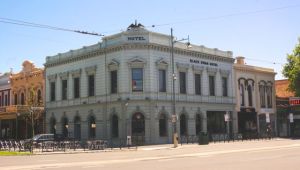 We started today (Friday) with a relaxing breakfast at a local café just outside the camp gate before heading into the city to continue our look around. There are many hidden treasures down alleyways, lanes and sideroads. Today is our last day in Bendigo and we still had a lot to see before we leave tomorrow. We made a visit to the Soldiers Memorial Museum. Completed in 1923, the museums collection covers the period of the Boer War and up to Iraq. Again it was a poignant reminder to us of the waste of precious life in war.

We have loved Bendigo and its architecture – it is a stunning historical city. Tomorrow we make our way further east to Laanecorie River Reserve beside the Lodden River. It is only about 70km away so there will be no rush in the morning. Our plan, weather permitting, is to stay there for two or three nights.