Our Weekend in Launceston comes to an End 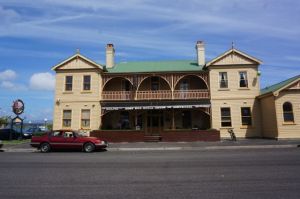 Our journey on Friday from Myrtle Park back into Scottsdale, then around the top end before driving south into Launceston, was brilliant. It was a warm sunny day, the roads were great and surprisingly, there was very little traffic. We made stop offs at Bridport and George Town but really there wasn’t too much to stop off for in between.

Friday was another one of those ‘Plan B’ days. Our original intention was to drive through Launceston and stay 20km south at Evandale. However during the last couple of days we were told of a terrific camping spot about 6km out of Launceston on a private property called Ol’ Mac’s Farm. We decided to go and have a quick look before we headed to Evandale. 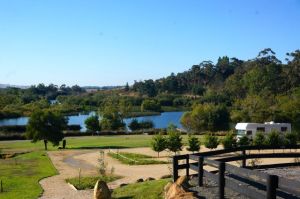 The farm consists of approximately 25 hectares, half of which is on a flood plain. Rather than have any concerns around managing livestock on the wet land during winter, the owner turned the flood plain into several small lakes and in the summer allows self contained vehicles to camp on the hard ground around the lakes. He also set up a restaurant on the farm and leased the kitchen to a couple of local cooks. Between the campers (there were about 30 vans each night we were there) and the kitchen lease, the farmer is probably doing very nicely thank you without the worry of stock. We decided the farm was to be our stop for the night. While we were charged $10 per night to stay, it is one of the best camps we have found in Australia.

Saturday morning we were up a bit earlier than normal, had a ‘campers’ breakfast at the farm restaurant, then made our way to Evandale, a small town on the banks of the South Esk River and about 20 km south of Launceston. It is classified a historic town with many of its buildings remaining largely in original condition. We have grown to love the look of the 1800 to 1850 style of stone building in Australia. We are not sure what they would be like to live or work in, but they sure look stunning. 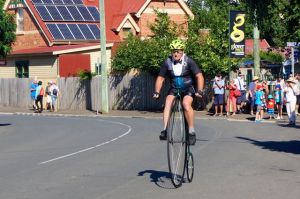 Out on his own midway through the endurance section

The real purpose for our visit to Evandale was to experience the annual National Penny Farthing Championships. The event began 1983 and has been hosted by Evandale since its inception. The competition attracts enthusiasts from across Australia and around the world. John Davey from Christchurch represented New Zealand in this championship. John was once crowned New Zealand’s fastest man on a penny-farthing. After spending a few hours of taking in the competition and the local market, we made our way back into central Launceston to have a wander around. By 4 o’clock the Captain had had enough and suggested we make our way back to the farm and stay another night. It seemed like a good idea and a great way to finish our Launceston visit.

This morning (Sunday) it is back on the road to undertake Tasmania’s inner loop. The loop involves travelling Tasmania’s interior so we will be driving south to visit Tasmania’s Perth, then onto Campbell Town, Ross, Oatlands and into Melton Malbray. From Melton Malbray we will turn north and drive through Rothwell to the Great Lake, onto Mole Creek, La Trobe then to Devonport. The total distance is about 400km and with all our stops we plan to be back in Devonport by this Friday. Not every stop will be an overnighter so we should be fine.