We finally departed Maroochydore at about midday on Monday.  It took us that long to get packed up as the people we had met at the Park kept popping in to say goodbye.  If we get one thing out of the next 18 months or so it will be all the great people we have met on our journey.

We ended up on Monday night at little seaside town called Rainbow Beach. It was an easy drive of about two hours up the coast. One of the main reasons we settled on the location is that it was beachside and was also the closed point to Fraser Island – a place on our ‘must see’ list.

Rainbow Beach is a very small place – a dozen or so shops, a population of about 1000 and of course a local Surf Club and Bowling Club. The first parking spot we tried to get into in the centre of town could not take motorhomes our size. The next option was a Park about 3km outside of town but it was also directly alongside a beach.  The Park is at least 15 hectares and we were able to pick wherever we liked. We picked a nice little flat site amongst the gum trees and about 50m from the shore. Very nice! Once we were all settled in we unhitched the jeep and took a quick look around the immediate area ending up in the Surf Club for a relaxing beer and Pino Gris. 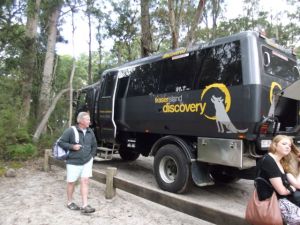 Rod beside our Fraser Island Transport

Tuesday we headed over the Fraser Island for the day. Fraser Island is the world’s largest sand island – 123km long and 15km wide. We were going to take the jeep across but were advised that unless we were experienced four wheel drivers, we should give it a miss.  The cost to take a vehicle onto the island is quite expensive as well – A$100 for the site license and A$80 return for the barge ride. As it turns out that it was the best advice we received all day. We ended up taking a day tour with one of the local operators (A$160) and from the moment we hit the beach we understood the advice.  It was very difficult terrain with even some local operators having ‘traction’ problems. 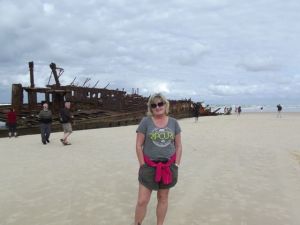 Dearne beside the wreck of the Stirling Castle

We had a great day on the island.  Managed to see a couple of dingo in the wild, the wreck of the Stirling Castle (an old WW1 Hospital ship of New Zealand origin) and numerous fresh water lakes  – very similar to the Kai Iwi Lakes north of Dargaville.  Our ‘learn something new’ for the day – there are stands of kauri forest growing very well on the island. Many are well over a 100 years old and growing entirely in sand.  After all the reverence layed at the kauri’s doorstep at home, we thought Kauri was only grown in New Zealand.  Not so it seems.  We finished up back at the motorhome at about 5pm. More photographs of our Fraser Island visit HERE. Another ‘must do’ thing ticked off the bucket list.

Today was a quiet day exploring all around the area in the jeep.  We doubt that we will be coming back this way so it was important we see what we can while we are here.  We drove back down as far as Eumundie and came back north through Gympie, Cooroy and the Cooloola region.  To be honest, while the beaches here are beautiful, we have as beautiful at home.

Will update again from Hervey Bay.

One thought on “At Rainbow Beach”