Our stay in the Rockingham region has been pleasant although the weather has not been that kind. We have had ‘off and on’ showers all day and the temperature got down to 19C.  We have spent most of the day in the jeep touring around.

We left quite early this morning with the intention of heading out to the coast on the Capricorn Coast Scenic Loop.  Our first leg of the journey was from Gracemere, through Rockingham and onto Emu Park on the coast. We first thought Emu Park was an actual ‘an emu park’ but it is in fact a small town. In between Rockingham and Emu Park we went past a sign that said “Crocodile Farm”.  So we did a u-turn and went to investigate. 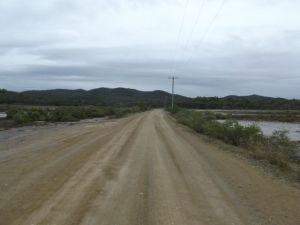 Road to the Crocodile Farm

It wasn’t too long before we were off the blacktop onto a red clay road and transiting through mud flats and mangroves. We were grateful we had the jeep not the motorhome at this point. Six kilometres later we arrived at the farm. It was not the smartest “attraction” we have been to, but having made the effort to get there we decided to have a look around.  After a couple of minutes we had seen what we wanted to see but we decided to support the local industry and have lunch at the on site restaurant.  Crocodile was on the menu so we ordered crocodile kebabs’ for two. The bill came to just under A$70. When we questioned the price as the menu stated that each meal was A$19 we were told we had to pay an entrance fee on top of the meal price even tho’ we had not entered the farm. We walked without dining.

‘Customer service’ attitudes astound us here some times. In this case we would have spent A$38 for the meal, would have had a couple of beers, a wine and coffees to finish and would have spend around A$70 anyway.  “Wood for the trees” stuff if you know what I mean.

A couple more shots of the crocodile farm visit HERE . 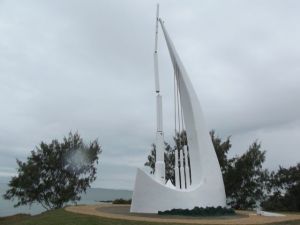 After the farm it was back on the road to Emu Park.  The township of Emu Park is situated at Keppel Bay, about 40km from Rockhampton. Keppel Bay was discovered and named by Captain Cook on 28 May 1770.  A ‘singing ship memorial’  (yes it does sing when the wind blows through the sails) has been erected on Keppel Bay point in his memory and the discovery. Emu Park also benefited with the purchase of our lunch!

From Emu Park it was back on the coast road through Kinka Beach, Causeway Lake, Mulambin Beach, Bluff Point, Double Head, Cooee Bay to Yeppoon.  We both decided it would be very easy to settle in Yeppoon.  It is a beautiful little town with everything one could want. The sun even came out while we were there.  From Yeppoon we drove back to Gracemere through Rockingham. As usual we crammed as much into our day as we could.

We leave here tomorrow heading towards Mackay.  Our Camp 7 book tells us that there is a very nice spot at a place called St Lawrence about midway to Mackay. We are planning to stay there tomorrow (Thursday) night.  Apparently cell phone and data coverage is very average there just in case family or friends call and cannot get hold of us.