It was an uneventful 190km drive from St Lawrence to Mackay on Thursday.  We had one small stop on the way to grab a coffee and to stretch our legs. It was a lot of road and not too much really to see. We could have dived on down a side road to the coast but the wind had been blowing about 40kts so a coastal ‘stroll around’ was not too pleasant.

A frequent visitor into the van

We spent a bit of time on Thursday having a look around Mackay and the general area. Towards the end of the day we ended up on the Mackay wharf at the local fish market and managed to get a ‘fresh fish’ dinner. We still haven’t found a fish that measures up to our own snapper. The birds (feathered variety) at our Mackay stop were super friendly. Within an hour or so of our arrival, they sensed a pair of softies and were coming into the van for something to eat. Even the magpies were sitting on the inside steps.

We continued north again on Friday as we could only get one nights’ park over in Mackay and could not find any freedom camping areas close by. The public camps are being booked by ‘grey nomads’ travelling north as we are.  The difference appears to be that we are not bothering to book ahead as we are never quite sure where we want to end up at the end of each day. It’s all part of our ‘fredum’ to do what we want.

Rock Wallaby with Joey by the Motorhome door

On Friday we continued north and managed to luck in at an ‘almost’ free camping site called Camp Kanga. Camp Kanga is about 24km west of Proserpine and 200km north of Mackay.  It is well away from any town and as it turned out, it was a beautiful place with plenty of wild life.  There were about ten other travellers at the site. At sunset the rock wallaby came out of the bush and gathered around our camp. Even tho’ they are wild, they were still coming within a couple of metres of our motorhome door.  We are loving the freedom camping life – there is so much to see and do. 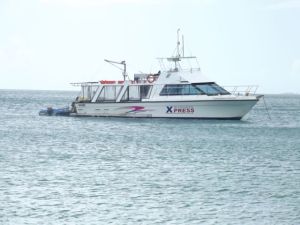 We departed Camp Kanga this morning at about 10am and made our way north. We could have made Townsville but we have stopped at the little place called Home Hill about 110km south of Townsville. It is a free camping spot in the middle of the town and directly beside the railway line. There are about twenty other vans or caravans here as well. With it being Sunday we are all hoping there will not be too many trains tonight.

Tomorrow we will really get to Townsville as we have booked into a low cost country park about 26km north of Townsville that is set on 55 acres of bushland. It has all the amenities we require, is close to the beaches and fishing spots, lots of wildlife in their natural environment plus they have a formal “5 o’clockers”.  Can’t be too bad.

We will spend the next few days exploring the area.

4 thoughts on “Our Journey North Continues”