You will recall on our last blog update we told you that we had experienced no rain since departing Brisbane at the end of June.  We should have known that by saying something like that, it is tempting fate.  After departing Amby on Monday morning we travelled about 200km and ended up staying at a free camping site just out of Chinchilla called the Chinchilla Weir. It is a dam site with plenty of ‘green’ grass and trees beside the water where self-contained vehicles can park up for a maximum of 48 hours.

We arrived at the site at about 5pm and by then the big black clouds had started rolling in from the west.  We made sure we were parked on solid ground and were facing the roadway for a quick exit if need be. By 6pm the rain started. Lightning was followed by thunder and deluge kept on for about 4 hours.  We decided to hang there until morning as the ground was so hard the water was just running off i.e. no chance for mud to form so no access or exit issues. Morning came and the weather was back to its normal hot sunshine self. We ended up staying at the Weir for two nights as a number of the people we had met in our previous stop overs were also there so it was social 48 hours.

As we had no intention of arriving at Toowoomba until Friday, a decision had to made as to where we were going to go after the Weir. Bruce and Lyn (our Bundaberg friends) had stopped at the Weir and were also attending the Toowoomba Flower Festival so we decided to travel there together. After a ‘round or two and much consultation’ we determined that we would drive to the Bunya Mountain National Park and spend a couple of nights there.  As we were heading east it seemed like a good choice. 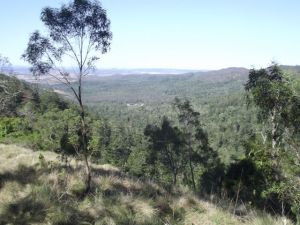 The National Park is approximately 120km in a direct line from Brisbane, is 11,700 hectares and is 1050 metres above sea level.  It was formed some 30 million years ago as a result of volcanic activity. As a result of the altitude we certainly noted a significant drop in day and night temperature.

In the late 1800’s it was a thriving timber area where a variety of rain forest species were milled.  The bunya tree is the signature tree of the area. The tallest bunya tree recorded in the milling days was 67 metres but it is thought that this was only the log measurement to the first branch!!

Dearne and her friendly wallaby

Bunya Mountain National Park is teaming with all sorts of wildlife – our parking area was about 2 hectares of flat green grass and there were about 50 wallaby on the grounds at any one time.  We were also visited by cuckooburra, king parrots, crimson rosella, owls, bandicoots, bush turkey, scrub wrens, kerrawang to name a few.  The wildlife over here continues to amaze us.

We departed the National Park this morning and arrived in Toowoomba mid afternoon. Because of the Flower Festival (and that we never book ahead) accommodation in the town was a little difficult to find.  We have ended up staying at the local show grounds for tonight and Saturday night. On Sunday we will be back on the road but in what direction, we are not quite sure yet. We will get out the charts in the next 24 hours and make a plan.

We will put a few pics up of our Toowoomba visit over the weekend.