Onto the Eyre Peninsula

Our departure from Adelaide last Friday morning was uneventful and to plan. The GPS got us out of the city and onto the Augusta Highway towards Port Augusta, the next stage of our Australian journey. As we had previously explored the coastline and inland areas between Adelaide and Port Pirie, it was a 306km non-stop drive north to Port Augusta. Once in Port Augusta, a decision had to be made,  ‘where to from here’.

After a bite to eat, we decided to drive 76km down the northeastern coast of the Peninsula to Whyalla. Whyalla is the home of OneSteel (formerly BHP Steel) and a city renowned as a steel and shipbuilding hub. The steelworks itself is most impressive and can be seen from miles away. It was getting late in the day and the only place we could find to overnight was the local sports ground. No complaints tho’ – our fault, but $10 gave us a parking space, a shower and toilets.

The long dirt road into the Port Gibbon camping area

On Saturday morning we continued further south and stopped briefly at Cowell. We had intended to make the town our overnight stop but the feedback we received from other travellers was that it was an ‘unfriendly’ travellers stop so we passed on through.

While we were in Cowell, we heard positive comments about a little seaside village by the name of Port Gibbon. The village was a further 40km further south on the Lincoln Highway then on an 8km of dirt road to the coast. We are normally averse to playing on dirt roads but in this instance we decided to give it a go. What a stunning little place! There were about six holiday homes there and the rest of the ‘population’ were travellers such as ourselves. 5 o’clockers was a very social event.

Strolling along the 10km of Port Gibbon beach.

The navigator became very nervous when other travellers informed her that the area was rife with scorpions. They apparently came out at night and settled in shoes, on jandels (thongs for our Australian followers) and matting. Consequently, there was not too much activity after dark outside our motorhome that night!!

It was our intention to stay at Port Gibbon for two nights but when we ‘finally’ surfaced on Sunday morning, most of our fellow travellers were starting to pack up. We were a little surprised as the previous night most said they were staying until Monday.  We were informed that overnight, the weather forecast had changed and was predicting rain within the next 24 hours. Apparently the area we were in was prone to flooding. We figured that between the flooding and the mud that would follow the rain, we would pack up as well. We were on the road by midday in beautiful weather. At that point we were having our doubts about the forecast. However by 3pm the skies were turning very dark and threatening. 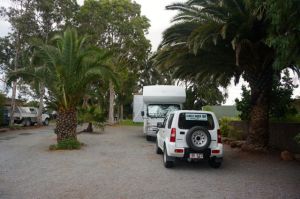 Our ‘dry’ parkup at Tumby Bay

We are currently settled at the small seaside village of Tumby Bay (about 50km north of Port Lincoln) on an RV site beside the Modra Apartments. We are on a hard surface, have power and water so the weather can do what it wants over the next few days. Our plan is to stay here until Wednesday by which time we hope the inclement weather passes.

At midnight last night (Sunday) the rain started and is still falling this morning. Our decision to shift on from Port Gibbons was the correct one – always go on your instinct. The campsite and access roads would be a ‘little’ muddy by now we think.

One thought on “Onto the Eyre Peninsula”