We loved our three days at Tumby. Like most of Australia’s coastal villages, Tumby has an interesting history. Mathew Flinders (of Flinders Ranges fame) first explored the area in 1802 and named the bay after the village of Tumby in Lincolnshire, England. In the early years Tumby was an important grain and loading port for the cereal and sheep farming industries. Today, it is primarily a service centre for the farming industry and a popular holiday and fishing spot. 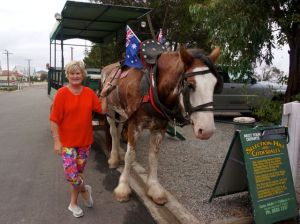 A note of interest for the ex service people following the blog – in 1949 the Australian government purchased approximately 16,000 acres of land surrounding Tumby Bay and developed 69 blocks with housing that was allocated to servicemen returning from the war. The village has a strong RSL influence with many of the servicemen’s descendants still residing in the area.

Unfortunately, the weather showed very little improvement during our stay at Tumby Bay. While it never poured down, the near constant drizzle made getting out and doing ‘stuff’ just a little more difficult. In saying that, we thoroughly enjoyed ourselves and were able to have a good look around. We would have no hesitation in revisiting Tumby.

On Wednesday morning we made our way a further 50km south to the town of Port Lincoln. Port Lincoln is Australia’s largest fishing port producing a diverse range of seafood worth hundreds of millions of dollars to the state and local economies.

Our first stop at Port Lincoln was the dentist for Rod. Unfortunately for him a porcelain veneer came lose and he swallowed it!! I did suggest there was a way ‘he’ could find it and surprisingly the idea didn’t really put him off.  Once found however, he struggled with the notion of popping the veneer back into his mouth. Suffice to say he has taken the easy way out (but not the cheapest). 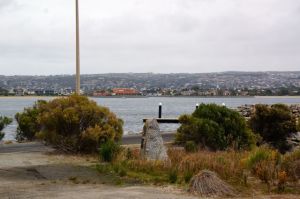 Port Lincoln township from our parkup at Billy Light’s Point

We are staying at Port Lincoln until Saturday and are parked up about 9km from the city centre at Billy Light’s Point. For the princely sum of $10 per night we are on a nice quiet tar sealed area about 15 metres from the waters edge. There were three vans here last night but as I write, we are on our own. Other travellers normally role up towards the end of the day.

Weather permitting Rod is considering going on a fishing charter tomorrow – we will let you know. The navigator will take opportunity of his absence to undertake a few hours of retail therapy in town.