Darwin now Behind Us

We made our home for two nights at the Mary River Wilderness Retreat, a great little camping spot beside the Mary River. We were advised to stay at least five to ten metres away from the waters edge at all times as ‘crocs’ were patrolling the river. Our neighbours told us they had seen a croc pulling a young bullock calf up the river that morning. We are heeding all advice I can assure you. 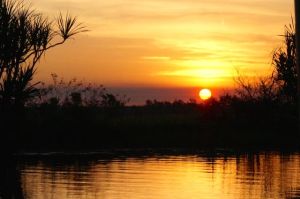 There were some great little walks at the Retreat. We were able to wander around the 1.5km Wallaby Walk, so named because of the abundance of wallaby in the area or when we were feeling a bit more energetic there was the 3km Bamboo Walk or the 8.5km River Walk. We managed to get in all three. The ‘salties’ basking in the sun along the riverbank were a constant reminder of the 5 metre rule.

Sunday night we did a sunset boat cruise on the Corroboree Billabong. The billabong is the largest in the Mary River Wetlands and has the biggest concentration of saltwater crocodiles in the world. We were told that there are 45km of navigational waterway on the billabong and there are 10 crocodile for every kilometre of water.

During the safety briefing before the cruise we were advised that if we should fall in the water that we should not panic or splash about as that apparently attracts the crocodile as they think it is a wounded animal. Thank goodness we were never put to the test as all our disaster recovery plans had a mild component of ‘panic’ involved. All that aside, it was a stunning couple of hours on the water – the animal and birdlike were amazing.

A Nankeen Night Heron casually watching us pass by on the Billabong cruise. The bird is at least 75cm high.

Kakadu (or Kakadon’t, depending on your view of the area) is about 20,000 square kilometres and is a diverse landscape ranging from coastal sand dunes and tidal flats to elevated rocky creeks and plunging waterfalls. Rainforests, wetlands and huge tidal rivers make up the landscape. On our way to Jabiru we crossed the Southern Alligator River and were quite relaxed about seeing four and five metre salties either basking in the sun on the riverbank or swimming in the river. It’s amazing how your attitude changes and accepts without question the risks of your surroundings. While not ignoring the risks, one adjusts one behaviour to best manage the risk.

We arrived in Jabiru at about midday and made our home for the night at the local caravan park. Once we had settled in, we unhitched the jeep and drove another 40km to Ubiir on the Arnhem Land boarder. Ubiir boasts the most exquisite rock art in the area and it is said to date back some 5000 years. The Captain struggles with the originality of the art as he heard a rumour that at times the local indigenous prison inmates are employed to ‘touch up’ the art for the tourists.. One will never know I guess.

Tomorrow the plan is to head south to Cooinda. Cooinda is only about 50km from Jabiru but it is close to the famous Yellow Waters Billabong. The Captain wants to get onto one of those flat bottom boats with the big airplane propeller on the back. – maybe this will be it.

3 thoughts on “Darwin now Behind Us”