Lake Colac, Deep Lake then on to Warrnambool 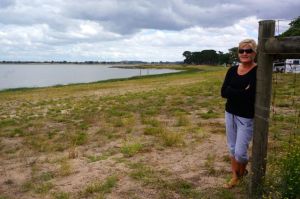 Dearne wrapped up for the cold at Lake Colac

It was an easy drive to Lake Colic on Sunday as 70 percent of the drive was freeway. We based ourselves on the north side of the lake at Meredith Park, a free spot on grass and directly beside the water. Because of Sunday’s weather many weekend campers had decided to return home. By the time we arrived at the lake there were plenty of spaces to choose from.

The Lake Colac has a circumference of 33 km, a surface area of 2,778 hectares and an average maximum depth of no more than 2.5 metres. The lake is part of the landlocked Corangamite basin formed by early volcanic activity. The closest town to our camping spot was Colac, directly across the water on the northern side of the lake and 148 km west of Melbourne. Colac is a commercial, service and local government centre of nearly 11,000 people located at the eastern edge of the world’s third-largest volcanic plain. While a rich agricultural area, it is also a popular location for fishing and water activities with the lakes first rowing club being founded in 1872.

A situation we found amusing at Lake Colac was the two very large flocks of pelicans that were continually swimming across and around the lake. We were told that local fishers had recently restocked the lake with fingerlings and the pelicans were doing their very best to ‘destock’ it. Because pelicans are protected, the locals could only stand and watch the grand feast taking place.

Tuesday morning we departed Lake Colac to have a look around the township of Colac. Because we wanted to continue freedom camping for the rest of this week we also took the opportunity to top up with water and groceries. From Colac we drove 110km north to Deep Lake, our home for Tuesday and Wednesday night. 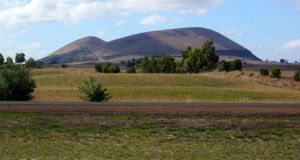 Deep Lake is about 5km from the town of Derrinallum. With a population of around 600, Derrinallum is situated at the foot of Mount Elephant, a 240 m high dormant volcano that has a crater 90m deep.  Mount Elephant was purchased by the community in 2000 and they are develop it as a tourist destination.

Deep Lake, when full, covers an area of around 85 hectares but it was nowhere near that during our visit. The lake’s jetties and pontoons had settled on the dry land around the edge of the lake such is the need for rain in the area. There was quite a bit of birdlife on and around the lake but no pelicans – they were all down on Lake Colac!! We were surprised that in the two days we were at Deep Lake we saw no other campers or locals. It was really quite nice – it’s not often you get a whole lake to yourself.

This morning (Thursday) we made our way 120km to Warrnambool on Victoria’s south coast. Having spent a week or so here about a year ago, there is not too much we have to see so we are using our time here by readying ourselves for Tasmania. We are parked up at a local motorcamp for the night so we can give the motorhome a clean, do a bit of minor maintenance, refuel, and fill with water. We will pick up a few groceries here but are unfortunately are unable to take fruit or vegetables onto Tasmania. We will do a fruit and vege shop when we arrive.

Tomorrow morning we will drive 15km up the Hopkins Highway to Brent and Jo’s farm where they take possession of the jeep. I hope she will be as kind to you guys as she has been to us. We will stay on the farm until Sunday morning before driving back into Melbourne to catch the ferry to Tasmania on Sunday night.