Biding our time in Kununurra

Our layover at Kununurra has a strange feeling to it. Dearne will be in Perth from Tuesday while the Captain remains behind to look after the motorhome. This is our longest apart since 1992 and I think the Navigator is more worried about the Captains ability to cope rather than the other way around. What could possibly go wrong!

On Monday morning we drove with friends 100km north of Kununurra to the township of Wyndham on the Cambridge Gulf. With a population of 1000, Wyndham is geographically the top town of The West in relation to the Northern Territory Border and the last port northward before Darwin. The port services the areas huge cattle industry, the Ord River Irrigation Project and many mining companies.

Overlooking the town at 350 metres above sea level is the summit of the Bastion Range and the Five Rivers Lookout. We made the drive up a steep sealed road to the summit where we got a spectacular view of the rivers Ord, Forrest, King, Durrack and Pentecost entering the Cambridge Gulf. While the waters might look enticing, they are also home to the largest saltwater crocodiles in the world. 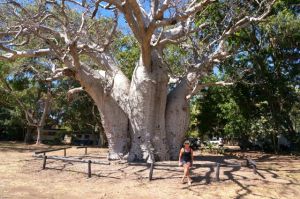 We did a drive through the Wyndham Caravan Park where the area’s biggest Boab tree is found. The tree is some 2000 years old, has a girth of 20 metres and with a canopy 25 metres high. They are strange looking trees but are very common around this part of Western Australia.

We also made a visit to the Wyndham’s Afghan cemetery. Located off the highway just out of Wyndham, this cemetery contains the graves of early Afghan settlers (1890s). The Afghans provided an important means of transport with their camels and donkeys, carrying food supplies and goods between towns and stations. The lead camel was always buried with his owner and facing Mecca. As you can imagine the size of the graves are somewhat larger than we are used to seeing.

After our mornings ‘work’, we lunched at the local café (the only one open in Wyndham) before making our way back the 100km to Kununurra.

Dearne headed off to Perth yesterday to visit Mia, grandchild number six and the latest addition to our family. We have both sorted out what we want to see in this region so the plan is that I will do my thing while Dearne is in Perth and the things we want to see together can wait til’ she is back on the 18th July.

This morning I made my way to the Hoochery Distillery, Western Australia’s oldest legal still. The Distillery is family owned and wherever possible uses locally grown ingredients. As many of you will know my favourite tipple is Coruba rum so I was interested to discover if any of the products made by the Hoochery was similar to the Coruba style. I couldn’t overdo the tasting because I was driving but found they certainly have a couple of nice rums but none with the Coruba taste. However, and as expected, there is a wee sample back in the motorhome.

On my way back to Kununurra I called in to The Sandalwood Factory. Set in the heartland of Kununurra’s sandalwood plantations, the factory’s parent company, TFS Corporation, holds the world’s largest resource of Indian sandalwood with over 7600 hectares of plantation across Australia’s tropical north. The factory produces a large range of sandalwood beauty, skincare and lifestyle products and if Dearne had been with me we would have probably spent a little longer than my five minutes!

It’s a big night tonight at the camp – happy hour from 5pm to 6pm then its burger and league night. Because of the west/east time difference, game starts here at 5.30pm. It should be a pleasant couple of hours.